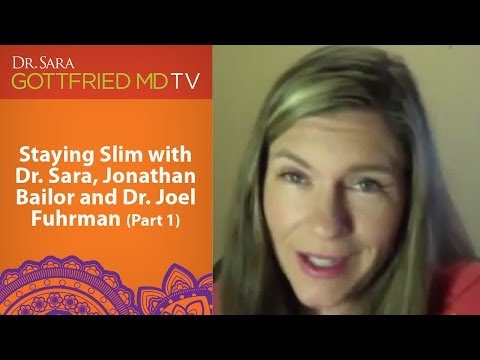 Recording: Welcome to the Smarter Science of Slim, the scientifically proven program where you eat more and exercise less to burn fat and boost health.

Recording: Eat smarter, exercise smarter, live better. I am so ready for that.

Jonathan Bailor: Hey everyone back in the bedroom, but in a good way with Dr. Sara Gottfried. What’s up, Sara?

Jonathan Bailor: So folks if you were listening to our previous chats, you know that we are both fans of the Dr. Joel Fuhrman. Sara, why do we like Joel Fuhrman so much?

Dr. Sara Gottfried: Well, Joel’s very bold, right? He basically says that you will not be satisfied unless you eat food that’s nutrient dense and then he defines it for you so I’m a huge fan. I feel like he really kind of cuts through all of the confusion and he gets super clear about how to decide whether food is nutrient dense. So should we maybe knock out of his formulas? Do you want to do one of his formulas, Jonathan?

Dr. Sara Gottfried: Exactly right. And calories I would say is another objective criteria that has been quite disproven. Calories just don’t embody the information that we’re trying to convey, but I do think it’s helpful. One of the things that Joel talks about in one of his early books, Eat to Live, is that health is nutrients divided by calories. Now here you see calories again, but nutrients and health are part of the equation as well. What do you think of, Jonathan, when you hear that equation?

Jonathan Bailor: I think of brilliance and I’m not just trying to plug Joel. But it was very informative in my own work when I talk sane foods, the end is nutrient density and I first heard that term from Joel and I think it really helps us to focus on the quality of the food we’re eating. And what I mean by that is for example take whole grain bread a/k/a, a good source of fiber and do that simple calculation compared to the same number of calories of spinach and tell me what’s a good source of fiber.

Dr. Sara Gottfried: Absolutely and you can even take it further. There was a recent New York Times article about nutrient density and how it’s been falling over time and when you look at something — even if among the greens — if you look at romaine lettuce versus dandelion greens, the dandelion greens are 60 times more nutrient dense. So I think this formula is so important to think about as you’re making food choices. So hands down I would choose the spinach, but even with the spinach I don’t want some crap from Wal-Mart. I actually want really good spinach from ideally a farmer that I know who hasn’t used any pesticides and it’s very rich spinach.

Jonathan Bailor: I love it, Sara. So once you’ve identified these classes of food, we can subdivide to do better and I think that actually is a great topic for our next conversation. Two things, one is how deep do we need to go to get the benefit because I think some people might be like, oh my God, it’s already hard enough to eat vegetables now I need to even subdivide even further. And then also, what does fat do to this equation? Because foods that are higher in fat are by definition less nutrient dense because fat does have more calories in it. So two interesting topics for the future.

Jonathan Bailor: All right. Excellent. See you in a bit, Sara.