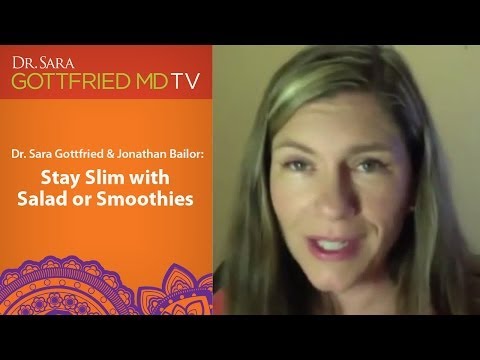 DStay Slim with Salad or Smoothies

Jonathan Bailor: Hey folks, we’re back. Sara Gottfried coming at you live – Dr. Sara Gottfried, I’ll throw that in there. And Sara when we stopped chatting last we were talking about how frankly until we’ve got pounds of vegetable goodness coming into our body we should probably just stop worrying about everything else and worry about that. That might be an over simplification, but in the right spirit. And you had mentioned how important salads are and I’m not a salad guy so it’s like, oh my gosh, there’s tension. No there’s actually not. I love green smoothies so much.

Dr. Sara Gottfried: What I love about this is it’s not either or. It’s not, okay I’m not a salad person, I can’t do this. It’s both and. That’s the new conversation that we need to be having. It’s both and. I’m a salad person, you’re not, you’re having smoothies, I love smoothies too so let’s talk about how people bring more of these into their lives.

Jonathan Bailor: Absolutely. So let me give you a concrete example of what I do. So I don’t like eating greens raw. I do not enjoy that very much at all so I get almost all of my raw greens in smoothie form, and I am saying smoothie not juicing, smoothie. I get a Vitamix/Blendtec, I blend up the whole food. Remember if we’re about whole foods that means you want to eat the whole food so you want to blend it not juice it. So I blend it up and then I usually find a way. I do like other vegetables like onions for example very much or even carrots, things like that, is I might have a wonderful piece of this organic grass fed beef liver beef sweet meatloaf my wife and I make and I might put it on top of a bed of lightly sautéed onions and have my green shake on the side. What do you think about that?

Dr. Sara Gottfried: I think that’s great. I mean you’re still extracting the nutrients. You’re getting the fiber because you’re using a Vitamix or a Blendtec. I haven’t heard of that one before. I have a Nutribullet and Vitamix so I kind of mix things up in my kitchen. I’m also a working mom and so I want to be honest about how much time these things take. What I do is I get my box from my CSA, my Community Sponsored Agriculture, and I chop up all the greens. I chop up the kale, and the chard, and the colored greens. I chop it so it’s pretty fine and I stick it in my freezer so that it doesn’t become like this nasty thing in the crisper of my refrigerator and then I use that when I’m making green smoothies. I also use it when I’m sautéing some kale. I know you don’t like that, but I would have my grass fed –

Dr. Sara Gottfried: Okay, okay with some onions maybe. So I think this is a really important way to eat it. How do you make this super simple. Another point that I want to make is when it comes to the raw brassicas like kale, like cabbage, like broccoli for people who have thyroid issues sometimes they get concerned about it having a goitrogenic effect in slowing down the thyroid. What I found is that the evidence doesn’t really support it and I think the benefits of eating these nutrient dense foods outweigh any small potential risk of it slowing down your thyroid. So I just want to make that message too that any goitrogenic effect of these things slowing down your thyroid I think is very small. It’s something that you should watch and I generally recommend eat your vegetables half cooked, half raw.

Jonathan Bailor: I love what you said about goitrogenic because that’s an awesome word in general.

Dr. Sara Gottfried: It is.

Jonathan Bailor: And I love also the practice you describe there of cooking in bulk because I think actually food preparation in bulk is required for this to work unless you have a personal chef and I think that’s why a lot of people might think it is a tractable problem because if you come home from work and you have to cut up a bunch of vegetables and blah, blah, blah where your kids screaming and you haven’t. But if you take two hours on Sunday which you now have because you’re exercising smarter and you don’t have to spend 20 hours exercising a week, you spend a fraction of that, then you spend two hours on Sunday cutting up your vegetables, cooking in bulk, maybe blending a bunch of smoothies like we do. My wife and I literally have all of our green smoothies for the entire week prepared before the work week starts. We wake up grab them, off to work, we’re drinking them at the desk. It’s as fast as eating a candy bar, but it’s just because we made that investment over the weekend.

Dr. Sara Gottfried: So do you make them and keep them in your frig? I want to dial this in so that our listeners really get it.

Jonathan Bailor: We do. I don’t want to bore people too much, but we are slaves to Costco. We love Costco. We eat a lot of foods so we have to buy in bulk and I’m also Polish so I’m very frugal with my money which I should probably be less frugal with my money but. So we go to Costco, we buy these big bags of spinach, big bags of kale, and big bags of romaine. Why do we choose that? Those are the only greens they sell there. So I would like to get more variety, but that’s all they sell. So then we literally take that, we wash it all up, throw it in the Vitamix. We do all the spinach at once, we do all the kale at once, we do all the romaine at once. Blend it up all into little mixtures, and then we do our [inaudible 00:05:08], we combine those up, blend them up, stick them in little shaker bottles. And if you literally came over to our house on a Sunday you would see a shelf of the refrigerator just consisting of nothing other than green shaker bottles, but it makes us smile and it saves us a lot of time.

Dr. Sara Gottfried: And it’s like totally activating the innate intelligence of your body which is really the important part here. How do you stay slim as you get older? You activate the innate intelligence of your body. That’s so important. So if we have any Costco buyers who are listening today, we are asking you to expand the selection in terms of your organic greens. How about some collard greens, how about some dandelion greens. And I also wanted to say for folks when they’re coming say it’s Monday and it’s been such a hard day that is when I think you’re most vulnerable to start eating the crap. So it’s very powerful to have the option of just opening up your frig and getting one of those shaker bottles out or just make a quick smoothie right then. I mean a smoothie I think is going to help you calm down the crazy pants that starts to happen around insulin, and leptin, and oh my God, you got to eat now, start eating the crap. So I’m a big fan of everything you just described.

Jonathan Bailor: Well, thank you. And no, we got to keep the crazy pants at bay and one of the things I love doing to keep my crazy pants at bay is eating in bulk. There are some people that don’t need to eat in bulk, I’m just used to having food in my stomach and a lot of it. I think this comes from I used to be really into fitness and I ate thousands and thousands and thousands of calories a day trying to get bigger. But I think there’s a lot of people that may have an athletic past who are used to eating a lot of food who then stop doing athletics and are not comfortable not being full. And I found that vegetables cures what ails me. That’s just bottom line. I get again Costco. They have this frozen vegetable blend which is carrots –orange carrots, yellow carrots, cauliflower, and broccoli and you can just them — they’re frozen and you put them in a boiling pot of water and then you eat them. Obviously take them out of the water first. But it’s like this giant bowl and you can eat them like you used to eat cereal as a kid just [inaudible 00:07:32] just a massive bowl. I love it.

Dr. Sara Gottfried: That’s awesome. We got to do a future session on the aging athlete because you just described my husband and I think we need to have a whole session for the guys who are aging athletes and how to work with this material.

Jonathan Bailor: I love it. How to Work with Your Material as an Aging Athlete up next folks. Don’t leave.