How to Work with Your Material as an Aging Athlete 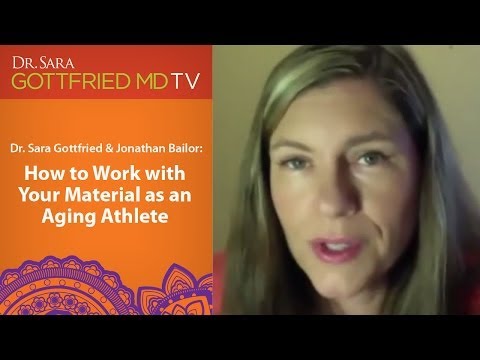 How to Work with Your Material as an Aging Athlete

Jonathan Bailor: Hey folks. We’re back with the Dr. Sara Gottfried, always electrifying and delightful and we are talking about – let’s say you were an athlete in the past and not so much anymore. What do you do now? So what do you think?

Dr. Sara Gottfried: Well, I feel like you’ve described my husband. My husband played tackle football for 12 years. He’s an entrepreneur, he’s in the green movement, and I still think that he has the expectation that he can eat the same volume that he did when he was doing two a day football practices. Like he still has that mindset sort of every day. He hasn’t adjusted how much he eats. So you actually had some great suggestions for the aging athlete who thinks that they can eat a box of cereal in a setting.

Jonathan Bailor: Yeah. I think a lot of it has to do with – earlier we were talking about Joe Fuhrman, the importance of vegetables, but I personally don’t think you need to give up magnitudes of food. I actually think as Joel says if you were not eating pounds of food per day that’s an indication that you might not be eating the right kinds of food. So what I like to do for example is lots of vegetables, like lots of greens, like lots and lots and lots. I do not limit those and in fact I intentionally try to eat a lot of them. And I also think people should just keep in mind that when you stop training athletically something is going to have to change about your diet. That seems obvious, but unless we consciously do something about it, it won’t happen.

Dr. Sara Gottfried: It’s so true. You know, my husband is – I love him and I love to talk about him and he doesn’t mind, but he’ll say to me when I make kale, for instance, he’ll just look at me and he’s just like, we’ve been together for so many years when are you gonna stop serving me kale, I hate it, I don’t want to eat it. And last night I made dinner and he had a small amount of brown rice, he’s a lover of carbs and he’s got a Mediterranean genotype so he can actually have more carbs than me because I’m a low carb genotype. I had a bed of greens, but I kind of mixed it up so it wasn’t all kale and had some caramelized onions and he loves those. What is it with guys and caramelized onions, I don’t know. And then I had some red lentil hummus with some chipotle and I put that on top of this kale mixture with the onions and he just totally dug it. So we’re trying to find ways to get more of those vegetables inside this former football player.

Jonathan Bailor: Sara, you hit the nail on the head there. So think about what we traditionally use as filler, right? We all do this. That’s what starch is. You have rolls, you have rice, you have pasta. Why? To fill you up. Rolls are literally served to fill you up. That is their purpose. So we need to have something else to take up that space in our stomach. Just use vegetables instead. I hated vegetables for my entire life up to about maybe seven years ago. Use kale, a bed of kale, cooked kale, sautéed kale. Use a bed of sautéed onions, mushrooms, any kind of green. Throw in some coconut oil, throw in some seasonings. Just use that as your rice. Use that as your filler. Use that as your starch. What do you think?

Dr. Sara Gottfried: I like it. I mean that’s the way I eat because I don’t eat much in the way of grains. I just find that they don’t work well on my body. I blimp up overnight when I have gains so I stay away from the grains. Occasionally I’ll have a little quinoa, but most of the time I’m using greens as the backbone of every meal that I have.

Dr. Sara Gottfried: …everything and greens. [Inaudible00:03:58] of the greens, I got to stay away from the greens.

Jonathan Bailor: And, Sara, we have so much just really quickly about healthy whole grains. But I’ve always been a little confused by that because sure whole grains are healthy compared to sugar, but wouldn’t we just be better off eating more vegetables?

Dr. Sara Gottfried: I think so. You know, I’m still trying to wrap my head around the literature on grains. I think that there’s some people who do fine with whole grains and then there are those of us who have such exquisite insulin receptors, such exquisite leptin receptors that we don’t do well on grains. So my focus really is on greens, vegetables, protein like really healthy sources of protein. I also focus on fats and as I mentioned in a previous session, I need more of the plant-based fats – the poofahs, the polyunsaturated fats compared to saturated fats. That’s one of the ways that I have maintained my weight as I age.

Jonathan Bailor: So, Sara, let’s do one more segment here because we’ve got a busy day I know. But folks when we come back, you heard Sara just mention protein. You’ll also notice that we’ve been talking a lot about vegetables. Sometimes though, you might be wondering, a lot of the people promoting vegetables also say protein causes cancer. Topic for another conversation. See you in a bit.

Those 100 Calorie Snack Packs will leave you starving

MONSTER Zucchini:  What to do?
Scroll to top