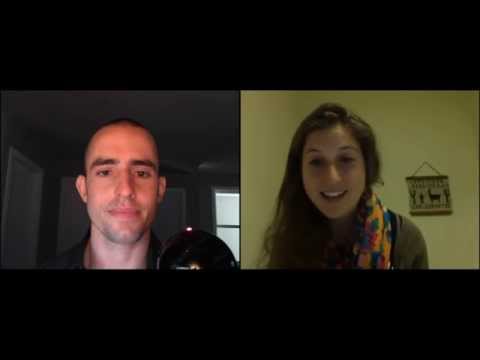 Jonathan Bailor: Hey everyone. Jonathan Bailor back with another bonus Smarter Science of Slim show, and friends we have got something really special for you today. I’ve never actually experienced this before. So one of the wonderful listeners of the show sent me an email the other day and said, “Jonathan, you have to watch this video.” So I go, I click on the video, and I see this video for this brilliant young lady, Lily Myers, reading a poem called “Shrinking Women,” and immediately upon watching this video I said, Oh my gosh. Who is Lily and how can we get her on the show to share this message. Because this poem, I kid you not, the first time I watched it I got chills.

The second time I watched it and heard it, my eyes started to water up because she so eloquently captures in about three minutes a subject that we talk about in detail on this show and that is living a life at the mercy of the scale, or at the mercy of these numbers, which are irrelevant and that are ignoble and degrade us, instead of living our actual mission and passion and vision and living a loving, healthy, right life, not a “shrinking” life as Lily put it so well.

So she is a junior, I believe, at Wesleyan University.She’s actually in Buenos Aires right now, and she is joining us live to tell us a bit of her story, what inspired this poem, and then to do, and I can’t wait, a live exclusive reading of it. Lily Myers, welcome to the show.

Lily Myers: Thank you so much.

Jonathan Bailor: Well, so Lily, I got to just figure out here what inspired this. Now, I’m looking at the video on YouTube and again friends, it’s Lily Myers'”Shrinking Women.” Nearly two million views on YouTube. What inspired this piece?

Lily Myers: Well, obviously it’s a really personal piece. What inspired it, I guess, was watching these very subtle relations and interactions in my family that have a lot to do with gender, and I was really interested in the intersection of the gender relations and also relations to food. So I ended up using what I saw in my family to talk about something that I saw all around me as well. You know, to talk about something much bigger. Because even though it’s a personal poem, it’s a phenomenon that I see everywhere, you know.

Jonathan Bailor: Absolutely. Sometimes we talk about the disconnect between the science like what science has proven about health and fitness and what we hear about in the mainstream media, there’s such a sharp disconnect. Many people ask how we got so far off track. And when we get into more esoteric conversations on these shows, we sometimes get into this is really not about health and fitness. A lot of this stuff is just core cultural deeply ingrained. Tell us a bit about– I mean you used the example of eating and calories, but you represent a much bigger issue and problem. Can you talk about that?

Lily Myers: Yeah. I think we live in a culture that oftentimes pretends to value women and men equally, but a lot of the time does not. Men are prioritized in a lot of ways, and women are generally discouraged. Obviously, this is a generalization, but it’s something I’ve seen a lot. Generally discouraged from taking up space in the way that men do, whether that’s verbally or whether that’s, you know, controlling a situation or putting themselves out there, and I was really interested in how food was just kind of manifestation of that. Did that make sense?

Lily Myers: It is.

Jonathan Bailor: And one thing that I think you get so well in your poem is that this is about so much more than just calories and scales. And the world we live in now has taken that which can be so empowering and so liberating which is health and made it horribly unhealthy.

Lily Myers: And it’s when those values get mixed up, and our habits, like our eating habits, and things get very complicated and confusing, and it’s just empowering to realize that they need to be that way.

Jonathan Bailor: Brilliant, Lily. Well, without any further ado I think we have built up this wonderful piece as it should be built up and the piece is called “Shrinking Women,” and I would be so delighted if you could share with us.

Lily Myers: Yeah, I would love to.

Across from me at the kitchen table my mother smiles over red wine that she drinks out of a measuring glass. She says she doesn’t deprive herself, but I’ve learned to find nuance in every movement of her fork and every crinkle in her brow when she offers me the uneaten pieces on her plate. Every night she doesn’t eat dinner until I suggest it. I wonder what she does when I’m not there to do so.

Maybe this is why my house feels bigger each time I return. It’s proportional. As she shrinks, the space around her seems increasingly vast. She wanes while my father waxes. His stomach has grown round with wine and late nights, oysters, poetry, and a new girlfriend who was overweight as a teenager, but my dad reports now she’s crazy about fruit. It was the same with his parents. As my grandmother became frail and angular, her husband swelled to red, round cheeks, rotund stomach, and I wonder if my lineage is one of women shrinking, making space for the entrance of men into their lives, not knowing how to fill it back up once they leave.I have been taught a combination.

My brother never thinks before he speaks. I have been taught to filter. How can anyone have a relationship to food, he asked laughing, as I ate the black bean soup I chose for its lack of carbs? I wanted to say we come from difference, Jonas. You have been taught to go out, I have been taught to go in. You learned from our father how to emit, how to produce, to roll each thought off your tongue with confidence. You used to lose your voice every other week from shouting so much. I learned to absorb. I took lessons from our mother in creating space around myself. I learned to read the knots in their forehead while the guys went out for oysters, and I never meant to replicate her,but spend enough time sitting across from someone, and you pick up their habits.

That’s why women in my family have been shrinking for decades. We all learned it from each other, though. Each generation taught the next how to knit, weaving silence in between the threads, which I can still feel as I walk through this ever-growing house skin itching, picking up all the habits my mother has unwittingly dropped like bits of crumpled paper from her pocket on her countless trips from bedroom to kitchen to bedroom again. Nights I hear her creep down to eat plain yogurt in the dark, a fugitive stealing calories to which she does not feel entitled. Deciding how many bites is too many, how much space she deserves to occupy.

Watching the struggle, I either mimic or hate her, and I know not to do either anymore, but the burden of this house has followed me across the country. I asked five questions in genetics class today, and all of them started with sorry. I don’t know the classroom requirements for the sociology major because I slept the whole meeting deciding whether or not I can have another piece of pizza. A circular obsession I’ve never wanted, but inheritance is accidental, still staring at me with wine-soaked lips from across the kitchen table.

Jonathan Bailor: That’s good stuff, Lily. I really have nothing to say. I really have nothing to say. That is such a powerful piece, and listeners please don’t shrink, don’t shrink. Be strong, grow, manifest the unique brilliance that is within you, and take inspiration from a woman here, Lily Myers, who is absolutely doing that. So Lily, thank you so much for the, at this point, millions of lives you’ve changed and undoubtedly will continue to change, as I know you’re just getting started on what will be an amazing life.

Lily Myers: Thank you so much. That’s incredible to hear.

Jonathan Bailor: Oh, my pleasure. Friends, our guest today has been Lily Myers. Please check her out online. Just search for Lily Myers “Shrinking Women.” I’m a little over the clock right now so I’m going to have to wrap the show up. But Lily, thank you so much for joining us today. This has been an absolute pleasure and inspiration.

Lily Myers: Thank you so much for having me.

Jonathan Bailor: Listeners and viewers, I hope you enjoyed this wonderful conversation and just amazing piece of literature as much as I did. Our guest today was Lily Myers and please remember this week and every week after, as Lily tells, us don’t shrink. Eat more, exercise less, just do that smarter. Chat with you soon.

The Psychology of Eating with Mark David
Scroll to top